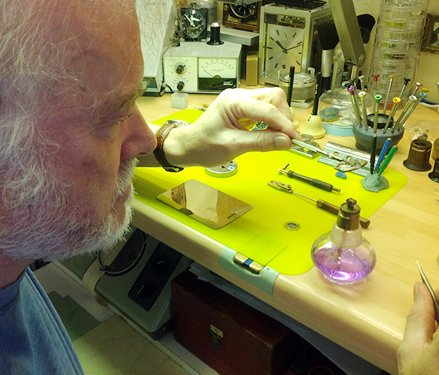 Peter is one of the great veterans of British Watchmaking, having spent 45 years in the business.

Peter qualified as a Fellow of the British Horological Institute in the early 70s. He was the first student from the UK to attend the original WOSTEP course in Neuchatel Switzerland under the direction of the founder Mr Andre Farine. During his time there he developed and constructed a unique mechanism for the Valjoux 72 chronograph.

To advance his horological experiences he spent time with IWC in Schaffhausen and then moved to the main Rolex factory in Geneva. At Rolex he gained the title of “Official Rolex Watchmaker” and so then was transferred to Rolex UK where he spent several years.

Peter then took a position at Garrard and Company – The Crown Jewellers – as Head of Showroom repairs. This was a move that was to change his life as one day a young lady walked in called Marie-Louise and as they say – the rest is history.

He was offered the chance to pass on his knowledge and expertise to the next generation, so qualified as a lecturer which led to him spending 13 years teaching technical horology at Hackney College. One of his teaching projects was designing a rather interesting version of a detent escapement for the students.
Peter became Head of Watchmaking where he taught many fine students including Stephen Forsey, Peter Speake-Marin and Simon Michlmayr.

Peter, Marie-Louise and their family returned back to Geneva where Peter took up a position in a rather special department at Rolex.

After an exciting couple of years the family returned to the UK where Peter and Marie-Louise set up a consultancy in horological technical design where they have advised and assisted a number of British and Swiss brands. One of these companies was Bremont, where Peter spent an enjoyable 4 years and developed amongst other projects, the famous MB roto-click bezel, floating anti-magnetic cage and also their beautiful Marine Clock (which was conceived on his kitchen table!).

Peter spent many years as a consulting lecturer in the UK for Rolex. And of course, he still keeps his watchmaking skills up to date, as he looks after much loved watch collections for a select clientele.

The Roberts horological dynasty continues with Peter’s son James. After finishing his university degree, James apprenticed under Peter. After working for several other brands, James now works within the family business.

When Peter and Marie-Louise have any spare time they like to walk in the beautiful Kent countryside or the tranquil surroundings of the Swiss Jura.